Since 1904 there have been nearly 100 Roseau County residents who have volunteered to be on the Fair Board of Directors.  Click here to see the list of people and the years they served.

1906 – The first Roseau County fair was held, near the stop light in Roseau where the Budd Building and the American Legion now stand. The first year of the fair was a one-day event.

1907 – The Roseau County Agricultural Society purchased the current fair grounds. The purchase price was $1,750 for 35 acres of land. The racetrack was in good condition, but more buildings and an amphitheater were to be erected. Entertainment was Lee & Rogers, most laughable comedians and Asaida, the lady contortionist, along with a Farmer’s Race and a baseball game between Warroad and Roseau.

1913 – The fair was held in September and had to be cancelled just two weeks prior to the fair dates as a fierce summer storm blew down all the buildings. 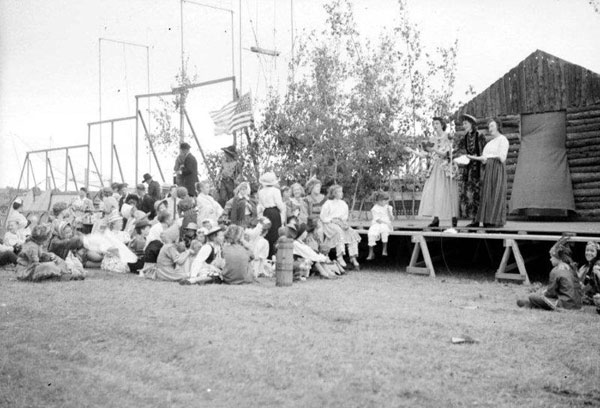 1914 – A flood inundated the fair grounds on the second day of the fair. As a result, the rest of that year’s fair was cancelled.

1918 – The fair began its 3-day run, but the board cancelled the last day as the Roseau River had spilled its banks from heavy rains and water covered the fair grounds. A stock barn, grandstand and music stand were added for a cost of $499.

1920’s – Evening performances were not held until the 1920’s when electricity from town was extended to the fair grounds. Foot races and farm horse races were big items during the early years of the fair. Cars were forbidden from driving over 10 mph on the racetrack. Help for the fair was hired at 50 cents an hour. A poultry barn and stock barn were built in 1920 for a total of $670. A new grandstand and wing to the main exhibit hall were added in 1927.

1929-39 – Depression years. No new construction except for out houses. 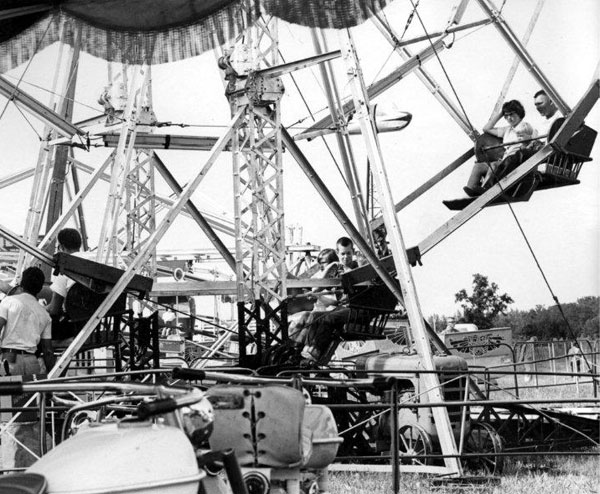 1932 – The local golf association rented the fair grounds. They complained of having to share the grounds with a herd of sheep and purchased other land in 1936. One of the holes was a blind shot over the grandstand.

1941 – This was a special fair as many of our servicemen were home on furlough and anyone in uniform was looked upon with awe.

1943 – The fair was cancelled by the board because they felt with all the suffering in the world caused by World War II, that all energies should be focused on efforts to support our GI’s who were fighting and dying in Europe and the Pacific. 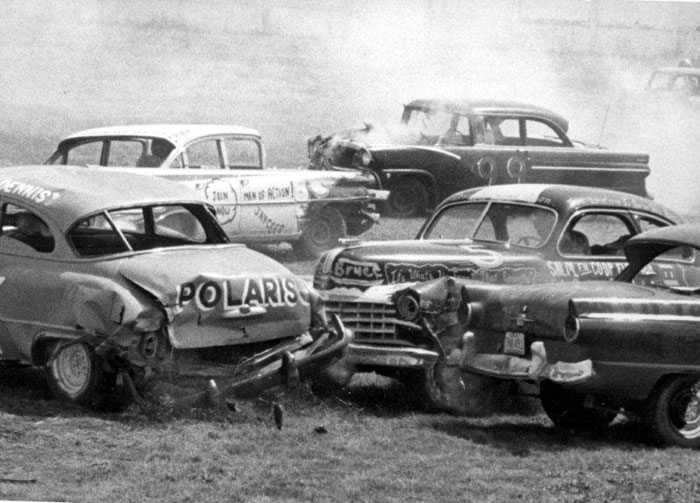 1954 – The County Board agreed to raise the mill levy 2 1/2 points and give the proceeds to the fair to make it a free-gate and help pay for a new 4-H Building.

1956 – The 4H Building and Exhibit Hall were built. School busses were used to transport people from the City of Roseau for the first time.  Sewer and water were extended out to the fairgrounds.  The south bathrooms were built.

1958 – The fair board voted to sell two outhouses because they were not being used anymore.

1960 – Advanced ride tickets were sold for the first time.  They were ten tickets for one dollar.

1967 – Charles Christianson organized Church Night. Unfortunately, he never saw it, because he died before the fair. He was secretary for 32 years, and is the only member of the Roseau Fair Board to serve on the Minnesota State Fair Board.

1968 – The Demo Derby was started. There were 15 cars entered. Parking area south of the 4-H building was purchased.

1976 – The Wick Building was built. USA Bi-Centennial celebrated! An exhibit building is added and later named the Haslerud Building in honor of former secretary Meredith Haslerud.

1982 – A new grandstand was built with donations from the public.

1986 – After the fair, the old exhibit hall was torn down and replaced with a new one. This was named the Magnusson building in honor of all the Magnussons who have served on the fair board.

1987 – Nationally known entertainment was hired for the grandstand.

1988 – Paving was done in front to the food stands. The Children’s barn was built. Both of the projects were funded by the County Veteran’s Associations.

1991 – The Aqua building was added and named the Billberg Building in honor of long-time fair board member Paul Billberg.

1992 – The new mini-stage was built. Fair started to run four days instead of three.

1994 – New grandstand stage was built. The fair ran from Wednesday through Saturday.

1995 – The first aid building was added with donations from the hospital and four veterans’ organizations. A cellular phone trailer was at the fairgrounds for fairgoers to use.  It was suggested that they donate 25 cents to the 4-H if they used it to make a call. 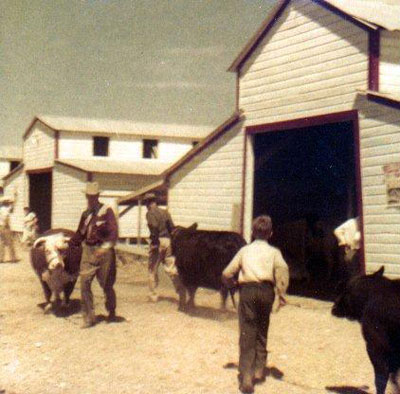 2002 – In June, Roseau flooded and so did the fairgrounds. Water flowed through every building on the grounds. The maintenance crew, along with several volunteers, spent days washing the mud and clay out of all the buildings. No programs were cancelled and the fair went on as usual. The new horse barn was built by the Roseau County Posse.

2004 – The midway area was too soft to set up so the carnival was moved to the parking lot south of the 4-H building.

2005 – The Fair Board commissioned Marv Espe to paint a Centennial painting for our 100 year anniversary. This painting was unveiled at church Night at the Fair and dedicated in honor/memory of the many years of service Buddy Magnusson volunteered to make the fair what it is today.

2006 – Roseau County Fair celebrated its centennial. Advanced ride tickets were increased 10 for $12.  An addition to the Billberg building was completed.   A professional rodeo and singer Joan Jett were grandstand entertainment.   There was a free lumberjack show for two days.

2007 – Addition to the Magnusson building was built.

2009:  A new concrete floor was poured in the 4-H Building.  A new mini-stage was built with a $5,000 contribution from the Border State Bank.  The old mini stage was donated to the Roseau City Park.  Advanced ride sales were over $100,000 for the first time.

2010:  A new poultry barn was built and the secretary’s office was remodeled.  A new sidewalk on the north and west side of the 4-H building was put in.   Kari Nelson, former Roseau resident, performed at the grandstand.

2011:  Steel siding was put on the Industrial Building, horse arena was redone with new announcing stand,  & a gas water heater was installed in the 4-H building.   Grandstand featured a local talent contest.  A soybean play area was added.

2012:  Chariot races returned as a grandstand event.  New steel siding was put on the Wick Building and the north bathrooms.  A new Cultural and Heritage Building was constructed.  Showers were put in the 4-H Building and the Pig Barn was extended.

2013:  Improvements on the south bathroom were steel siding and door.    We updated the wiring and installed 16 fans in the barn.  Local rodeo was the featured event at the grandstand.

We're not around right now. But you can send us an email and we'll get back to you, asap.